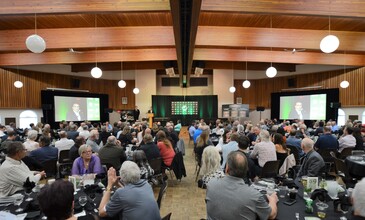 The Dinner featured news reporter Matthew Dekker who served as emcee for the night's festivities. The Induction Dinner marked the ninth time this event has been held and the first time it was hosted in Zone 4.

Upon the summation of the event and its auction, a total of $44,824 was raised. These proceeds were split evenly between the Yorkton Terriers junior hockey club and the SHHOF.

To see pictures from that night, head over to the gallery section by clicking HERE.

Last but not certainly not least, we'd like to congratulate the nine (9) new inductees who were honoured in the Player, Builder, Grassroots, Officials and Teams categories.

The seven (7) inductees and two (2) teams were as follows:

The Ted Knight Saskatchewan Hockey Hall of Fame Induction Dinner is presented by SaskTel and operates with a chosen host committee to put on the event. Proceeds from the event are split evenly amongst the two groups to help fund the yearly operations of the SHHOF in Swift Current as well as the local host community’s chosen initiative.

SHHOF opened its doors in 2012 which coincided with Hockey Saskatchewan’s 100th-year celebration. The Hall of Fame is located in Swift Current at the InnovationPlex. For more information, please visit www.saskhockeyhalloffame.com.