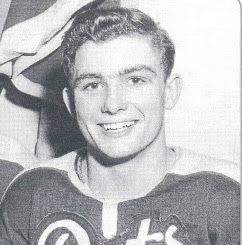 William "Bill" Hicke (Regina) has been inducted into the Saskatchewan Hockey Hall of Fame in the Player category.

Hicke excelled at many sports in his youth, but eventually, it was hockey that would consume him and steer his life to the big leagues. After being called up at the early age of 15, he would spend his entire Junior career with the Regina Pats between 1954-58. In 146 regular-season games, he scored 251 points including 142 goals. He led the league in goals and points during his last season and led the Pats to three consecutive Memorial Cup appearances. He was the first player to have his jersey “number 17” retired by the team.

The jump to professional hockey proved to be no challenge for Hicke. In his first year, he won the scoring title in the American Hockey League (AHL) while playing for the Rochester Americans. He was also named AHL First Team All-Star, AHL Rookie of the Year and the League’s Most Valuable Player. He is the only player in the history of the AHL to win all of those awards in the same year. With that exceptional performance, the Montreal Canadiens called him up for the Stanley Cup Playoffs in 1958, where he would win the first of his two Stanley Cups. In 1959-60 the rookie right-winger would earn a full-time spot on that legendary Canadiens team who won their fifth straight Stanley Cup, a record that has never been broken. His best season in a Canadiens uniform came during the 1961-62 season when he scored 20 goals and totalled 51 points. He also had 18- and 17-goal seasons for the Canadiens. Hicke was traded to the New York Rangers on December 21, 1964, and finished the 1964-65 season in the Big Apple.

His career almost came to a tragic end the following season when he went into a two-week coma while battling a respiratory illness. In the summer of 1967, he was claimed by the Oakland Seals in the expansion draft. While playing for Oakland, he enjoyed his most successful seasons in the NHL point-wise. In 1968-69, he scored 25 goals and recorded 61 points in 67 games. That season earned him his third trip to the annual NHL All-Star game. Hicke’s last NHL season came in 1971-72 playing for the Pittsburgh Penguins. He would finish his playing career in 1972-73 by suiting up for the Alberta Oilers of the World Hockey Association.

After his playing career was over, Bill returned to Regina and purchased Kyle’s Sporting Goods. Hicke credited his roles as the NHL Players Association representative in Oakland and president of the WHA Players Association as a stepping stone for his successful business career. In addition to Kyle’s, Hicke also co-owned, managed, and briefly coached the Regina Pats from 1985-1995, until their ownership group sold.