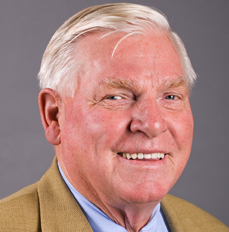 Bill Hay is a Saskatoon native who worked his way through the ranks of hockey to join the Regina Pats in 1952. His hockey skill and schooling led to an athletic scholarship at Colorado College. Bill was an integral part of the Colorado College hockey team, earning All-Star team honours consistently and a Bachelor of Science in Geology.

In 1958, Bill attended the Montreal Canadiens training camp and was loaned to the Calgary Stampeders of the WHL. The following season, Bill was shipped to Chicago and made his first NHL appearance with the Blackhawks in 1959-60. In 70 games with the Hawks, he earned the Calder Memorial Trophy as Rookie of the Year in 1960. He spent most of the next eight years on the “The Million Dollar Line” between Bobby Hull and Murray Balfour.

He played in two All-Star games and in 1961, he led the Hawks in scoring with 59 points, setting a team record with 48 assists and helped his team win the Stanley Cup in 1960-61. Following the 1965-66 season, Bill retired to Calgary but the General Manager of the Blackhawks tried to coax Hay back and he succeeded in having Bill finish out the last half of the 1967 season, leading the Hawks to first place overall for the first time in franchise history and cementing Bill’s retirement from hockey that summer.

In 1955, Bill retired from oil and gas in Calgary and joined Hockey Canada as the President and Chief Operating Officer. After one season, Bill joined the Calgary Flames as the President and CEO, where he spent five years. He then joined the Canadian Hockey Association as the Planning Advisor for Centres of Excellence, and he was also a member of the Canadian Special Olympics Advisory Board and the Hockey Hall of Fame Selection Committee. In 1999, Bill Hay was hired as the Chairman of the Hockey Hall of Fame.