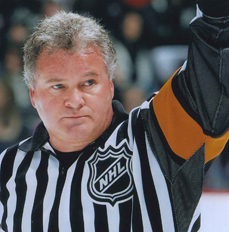 Mick, a Regina native, got his start working games at the age of 23, following a hockey career that wrapped up in Spokane, Washington in the Western International Hockey League.

He started out as a linesman in the WHL but quickly switched to referee. He moved up the ranks with his WHL culminating in officiating the 1986 Memorial Cup final.