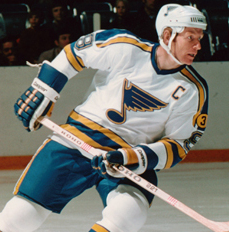 Gordon “Red” Berenson, native of Regina, played with the Regina Pats Midgets where he was named the SJHL Rookie of the Year in the 1956-57 season. From there, he attended the University of Michigan where he won the MVP award in 1962.

Berenson played in the original and legendary eight-game Canada Cup series for Team Canada vs. the Soviet Union in 1972 as well as the "old-timers" rematch of the Canada Cup in 1987. In the fall of 2005 he, along with the entire 1972 Team Canada roster, was inducted into the Canadian Sports Hall of Fame.

Following his retirement as a player after the 1977-78 season, Berenson remained in St. Louis as a member of the Blues' coaching staff. He took over as head coach with 56 games remaining in the 1979-80 season and the following year was named the NHL Coach of the Year. In 1984, Berenson became the head coach at the University of Michigan.