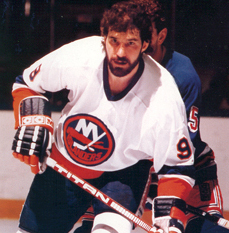 Clark Gillies was born and raised in Moose Jaw where he played baseball in the summer and hockey in the winter. He was a great ballplayer, playing three seasons in the minors in Houston, but ultimately, he decided to pursue hockey. He played for the Regina Pats for three seasons with his final season culminating in a Memorial Cup win (1974).

He played on the so-called “Long Island Lightning Company” line, with line-mates Bryan Trottier and Billy Harris who was later replaced by Mike Bossy. Clark was only 22 when, in 1977, he was selected to be the new captain of the Islanders. Clark played with the Islanders until 1986, leading them to four consecutive Stanley Cups. In ’86, he was traded to the Buffalo Sabres where he played two more years before retiring in 1988.