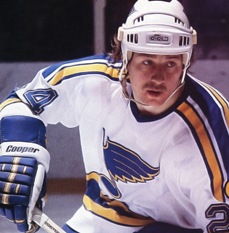 Bernie, a native of Foam Lake, started with the Foam Lake Flyers, moving on to an outstanding junior career with the Saskatoon Blades from 1973-76. During that time, he scored 166 goals with 245 assists in 249 league and playoff games. Thanks to an amazing last year, he was chosen seventh in the NHL draft by the St. Louis Blues.

In the 1976-77 season, he split his time between the Blues and Kansas City of the CHL, where he was named the league’s Rookie of the Year. The next season, he moved up to the Blues, where he played for another 12 years. Federko finished his career with the Detroit Red Wings after the 1989-90 season.