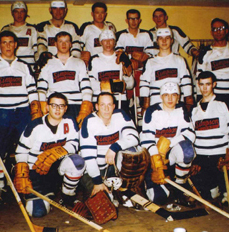 The Simpson Flyers have been inducted into the Saskatchewan Hockey Hall of Fame in the Team category.

The Flyers are being inducted for their outstanding provincial performances from 1965-72. The team started in 1952 as an intermediate team. Over the eight years, 52 players were on the Flyers roster. The team took part in exhibition, tournament, league, and provincial games.