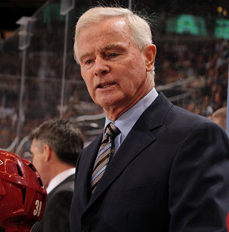 Dave King (North Battleford) has been inducted into the Saskatchewan Hockey Hall of Fame as a builder.

King started his coaching career as an Assistant Coach with the University of Saskatchewan in 1972. During his time with USask, he won three conference championships and was named the Canadian Interuniversity Athletics Union coach of the year in 1980. He led the Huskies to the CIAU national title in 1983.

During that period, he served as the Head Coach of Canada’s National Junior team and helped the squad win the Gold Medal in 1982 and a Bronze Medal in 1983. Nationally, he was also Team Canada’s Head Coach during the 1984, 1988, and 1992 Winter Olympics where he won a Silver Medal.

King was the Head Coach of the Calgary Flames and Columbus Blue Jackets, as well as the Assistant Coach of the Montreal Canadiens and Phoenix Coyotes. King is now coaching for Lokomotiv Moscow in the KHL.

In recognition of his contributions to the game with the national teams, Hockey Canada named him to the Order of Hockey in Canada in 2013.