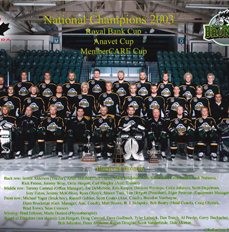 The 2002-03 Humboldt Broncos have been inducted into the Saskatchewan Hockey Hall of Fame in the Team category.

The Broncos had a very good 2002-03 season in the SJHL which helped lead them to a successful showing not only provincially but nationally. The team finished first in the SJHL with a 39-12-6-3 record. Humboldt defeated Melfort 4-0 in the first round, Battleford 4-2 in the second round, and Melville 4-0 in the league finals.