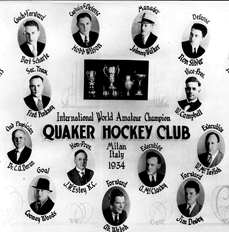 The 1933-34 Saskatoon Quakers have been inducted into the Saskatchewan Hockey Hall of Fame in the Team category.

The Quakers were a dominant team not only in Saskatchewan but across the globe. The 12-player team made their presence felt on the international level. On March 1st, 1934, the team travelled to Milan, Italy, to take part in the International World Amateur Championships.

The tournament consisted of a 12-team round-robin format. The team went on to beat the United States in the finals 2-1.