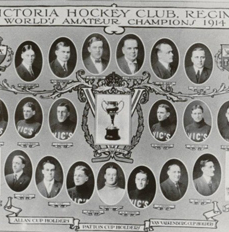 The 1914 Regina Victorias deserve this honour thanks to what they were able to accomplish in their very first year of existence. The club won the Allan Cup in the 1913-14 season against Grand-Mere, Quebec. In those days, the Allan Cup was as big a deal as the Stanley Cup is today.

Members of the team were as follows: